Have you heard the tales of the man in the red scarf? 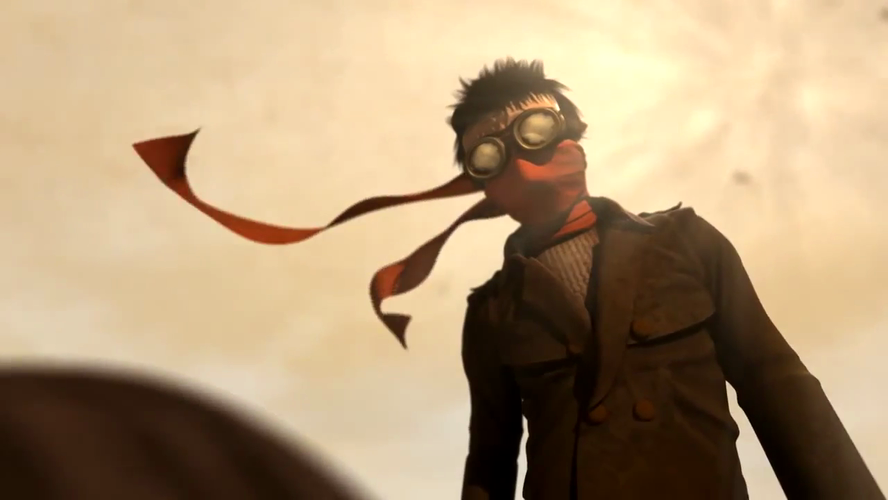 Inspired by this video we wrote our own stories

Red scarf
The wheel of the upside down car was spinning slowly, that would be another car and person destroyed . He placed his hand on the tyre and stopped it from moving .As he put his thumb up, an old fashioned car pulled up. The driver asked politely " Do you want a lift ?He got in.The wait was over. They both sat in silence as the car rattled along the dusty road. "Were you really in that car " ? the driver, who was an old man, asked.There was no response. This made the old man more nervous. The mysterious man took a quick glance at his watch. The old man looked directly into the scary man's face and screamed. He screeched as the car fell off the towering cliff .
One more person gone .
The wheel of the upside car was spinning again...

The wheel spun ,with an ear-piercing screeching noise.The sun glared down at the sandy wasteland. how long would it be till his next victim arrived? He stopped the wheel slowly.When a car came by ,he raised his thumb so the rusty car stopped. He looked through the window and said nothing.

"Theres a station just up the road I could take you there?"Said the driver , he opened the squeaky car door and the man got in.He sat as silent as a doll. Confused the man asked him "Are you ok?"there was no reply."That car there is it yours?"still there was no reply.

The road was twisty and bumpy and the fence was rickety.The sun continued to glare down.The man just stared ahead.A few seconds later ,he slowly rolled up his coat sleeve and looked at his glowing watch, then covered it up again.

The time was approaching. He turned his head and the driver looked into his black battered goggles,what future will he see?Horrified he sees his car going out of control. It zooms off through the fence and hits the cliff!.CRASH! The car flew off the road

The wheel spun with an ear piercing screeching noise...

As the ear - piercing screech of the wheel spinning on the overturned car came to a stop,the sun was blazing down on the desolate abandoned wasteland.A new victim slowly travelled along the dusty road.The rattle of the rusty car drew closer, and the mysterious figure raised his wrinkly thumb.The car braked with its howling screech .Here was his next prey,there was no escape. No turning back. Nothing.

"Are you alright?" asked the driver, but all was left silent.The driver nervously opened the stiff door,the figure hopped. in "We - were you in that car?" ,the driver asked terrified but that was still left silent.As the figure stared down at his luxurious watch,the driver peered over clueless of what the future held.The two travellers approached the valley which held rocks, cliffs and dirt. " Are you sure you're alright? ", the driver questioned the figure, still nervous.The figure tilted his head slowly and the driver saw ... It.The future and there they went tumbling of the cliff, crashing to the floor.In a loud BANG! but not all was gone...
The tale of the
psycho

As the ear - piercing screech of the wheel spinning...

As the screeching wheel kept rotating on the over turned car, I raised my thumb for my next prey.The blazing, scorching sun shone on me in this barren wasteland.
As another glistening car came along I put my thumb up to try to be friendly
but at the same time threatening.The driver asked if I wanted to get in.He opened the powerful door and said he would take me to the petrol station just down the road.
Five minutes later I stared down at my gloomy watch.The big -nosed man inquired if I was alright.I didn't say anything I turned viciously and sluggishly.Bang,Boom,Crash he had a collision with the wall.Smash,he fell off the cliff.I looked down, he was dead. I stayed up.Another glistening car came along I put my thumb up...

The story of the scarfed man

It's another day for people to die, the wait is agonizing. My thirst for blood is growing and growing bigger and bigger.Oh I can hear the rumbling engine of a car.It's time for my next victim to perish!

The sun shines around me, I wish I could take off my blood dipped mask off, Time to play the silent as a stones act. A car pulls up," Are you alright? There's a gas station down the road I can take you there"says the driver. Lets hop in then-remember Death, the stone still act."Are you sure you're alright?"he asks again.Time for my horror tactic - the slow silent stare.That look in his eyes of sheer terror.That will keep his eyes of the road. CRASH! BOOM!

The man spun the wheel with his finger. The dust blew around him as he turned to the noise of car as it stopped next to him. The stranger stood silently by the side of the old rusty car.

The driver of the car asked if the stranger wanted a lift. Without speaking the oddly dressed stranger climbed into the car beside him. Wearing a long tattered coat and dark round motorbike goggle, that made him look scary
and a ready orange scarf wrapped around his face, he sat as still as death in silence.

As the car traveled over the bumpy dusty road the dark misty clouds  covered the harsh sun. Inside the car the driver nervously asked a question...

Unfortunately not the ones with chocolate chips.

Some cookies are necessary in order to make this website function correctly. These are set by default and whilst you can block or delete them by changing your browser settings, some functionality such as being able to log in to the website will not work if you do this. The necessary cookies set on this website are as follows:

Cookies that are not necessary to make the website work, but which enable additional functionality, can also be set. By default these cookies are disabled, but you can choose to enable them below: